In my June blog, I reviewed three human approaches to considering the possibility of life elsewhere in the universe—looking at astronomical probabilities, reinventing life from chemistry, and creating artificial life (intelligence) with computer programs or robots that learn. The difficulty in jump-starting a new self-contained, reproducing entity seems to be related to the fact that life as we know it here on Earth was a product of very long processes centered on natural selection at every level–creating what are and must be extremely complex nested
systems with several sources of unpredictability –or as Ilya Prigogine put it—“irreducible randomness.”
We humans prefer predictable physics and chemistry, but since I was trained in biology, I have to “say it isn’t so.” Biology—life—is a very complex process. I’m sure the life scientists realize this, but in our daily lives, we take the processes of living for granted. We must, in order to survive and maintain our sanity.
We would do well to remember how amazing life processes are—not just in the subtle ways all life communicates, but in the amazing inventiveness of how its chemical processes have dodged poisonous threats in order to flourish and procreate. Example: the way deep sea vent tube worms and their neighborly crabs, mussels, and clams have avoided the toxicity of hydrogen sulfide. They not only dodge it, they use it to create and energize their complex lives—even though local vents may last only a few decades.
Now we realize that such sulfur-based symbioses between invertebrates and bacteria occur in diverse species and environments on Earth. Methane is also used in a similar manner. So the question remains—why is such wet chemistry so hard to re-invent? It’s not just the complexity and its unpredictable features that give us trouble. It’s time, and our
impatience, and the fact that we take our own lives so much for granted.
We forget the cliff-hangers that life’s invention has faced. Astrobiology probably faces similar chemical and physical challenges. 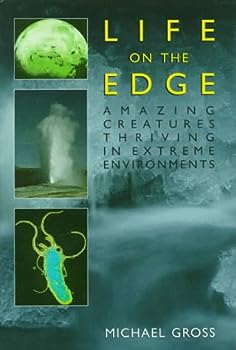 Cover of Life On The Edge

Decades ago Scientific American Magazine published a series of articles called “Life On the Edge.” I happened upon it while down-sizing my library. It’s editors presented evolutionary chemistry with great clarity. They observed that life has overcome several great challenges as it developed on Earth.
Among the challenges were these: First, a protective coating provided a critical advantage by isolating a living being from its environment—no problem, with the help of hydrophobic chemistry, osmosis and polarization. Then came the need to select “…most useful …efficient building blocks” and avoid getting poisoned in the process—okay, the deep sea vent tube worms and their pals did that. Working around the dangers of oxygen took longer
But first, the next big issue for life was finding a source and a way to store energy. Fats and sugars worked, as did glycolysis for chemoautotrophs, but life was in a tight chemical harness for “its first eons” until cyclic photosynthesis evolved, in which solar energy charged membranes to make our energizing ATP. At an early time, CO2 and NH4 were enough to make nutrients more efficient, until non-cyclic photosynthesis came along. Then a use for the increase in Earth’s oxygen was found, which is now called the chemical citric acid cycle.
Oxygen, however, blocked UV rays that converted nitrogen into ammonia (needed to make proteins and nucleic acids). So, next came the nitrogen crisis. It was being used up, so some organisms began eating autotrophs. Nitrogen fixation was invented, but it was an energy hog and cost 30 ATPs. It’s still limited to “heavily anaerobic conditions.”
Oxygen created higher cells, developed when cleaver critters discovered how to cooperate with others. Using symbiotic adaptation, once-free organisms gave up their freedom to become an integral part of true eukaryotes. Once these true cells had a nucleus, elaborate genetic operations developed, and larger more complex animals emerged onto our planet, including us.
Not a simple chemistry experiment, all this. We’ll have some fun exploring all these crises in coming months as we dig deeper into the current alife studies.
—
Author of The Webs of Varok
Nautilus silver award 2013 YA
ForeWord finalist 2012 adult SF
Books, On Writing, Characters and More– http://ArchivesofVarok.com
Book Reviews– http://www.goodreads.com/Cary_Neeper
Animal Sentience– http://www.ladailypost.com
Complexity, Bio, Biblio and Links– http://caryneeper.com
Astrobiology– http://astronaut.wpengine.com
Share
0