Nasa‘s Curiosity Mars rover has been put into “safe mode” after a computer glitch caused by corrupted files.

The robot, which is analysing rock samples on the red planet, is now running from a back-up computer.

Nasa scientists are looking into possible causes for the files on the robot’s flash memory being damaged.

The fault means the rover’s work has been put on temporary hold while the back-up computer is reconfigured so it can take full control.

“We’re still early on in the process,” said project manager Richard Cook, in an interview with Space.com.

“We have probably several days, maybe a week of activities to get everything back and reconfigured.”

The rover has been running on the back-up computer since Thursday.

“We switched computers to get to a standard state from which to begin restoring routine operations,” Mr Cook said.

On the robot’s Twitter feed, Nasa wrote: “Don’t flip out: I just flipped over to my B-side computer while the team looks into an A-side memory issue.”

The corrupted files may have been caused by stray cosmic rays.

Speaking to Space.com, Mr Cook said: “The hardware that we fly is radiation-tolerant, but there’s a limit to how hardened it can be. 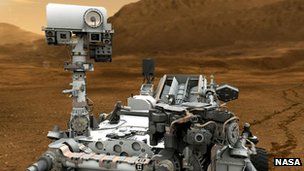 The rover has two computers on board, with researchers able to install software remotely

“You can still get high-energy particles that can cause the memory to be corrupted. It certainly is a possibility and that’s what we’re looking into.”

The timing of the glitch would frustrate Nasa as Curiosity had just begun analysing rock samples, the BBC’s science correspondent, Jonathan Amos, said.

Samples from Mars‘ surface had been ingested into the rover’s on-board laboratory last month.

Our correspondent added that the back-up computer on the rover had previously been used to test software updates before they were installed on the main machine.

Due to capacity limitations on the craft, the rover launched with only the software needed to land. Once on the planet, new software had to then be installed remotely.

Latest posts by Sebastien Clarke (see all)
From Sputnik to TV Screens: A Brief History of Satellites Previous post
Could a Comet Hit Mars in 2014? Next post